The streets are lined with pavement cafes endless tables of mostly older gentlemen drinking chai whilst indulging in their weekly catch up. I see a phone shop, I bet I can get a new memory card there; I pull up and weave my way through the maze of tables on the pavement. I can’t quite explain what I need so I go back to my bike to get an example, all be it 4 times the size. An elderly Muslim gentlemen calls out to me

Ang on, I’m in the middle on a transaction here.

‘One moment sir, I’ll be right back’ I continue with my quest, he looks at my memory card, understands exactly what I need and confirms he hasn’t got anything like that at all. I go and sit with the chai drinkers.

The person who invited me is a big bear of a man, old but strong and fit, a grey trimmed action man beard, regardless of what he has witnessed behind his bright eyes, they still smile at me. He speaks French but not unfortunately Spanish or English, I think he once worked in France, I seem to be the connection, the mind jog to his fond European memories of when he was a younger man, perhaps the man he sees in me. Next to him is a more fragile man who seems to have been swallowed by his suit, he sits with a cheeky smile, attentive but happily stepping back from the conversation, he takes sugar lumps from the bowl in the centre of the table and dunks them into his chai before sucking at the softened sugar cube and then repeats the process. I instinctively want to say this behaviour will rot his teeth, but he has to be 80 and his smile is white and intact. I can’t imagine he has only just picked up this habit.

Other people gather round our table, the feeling is comfortable and relaxed with an underlying sense of frustration at our inability to communicate in a common language. However that is overridden with a huge feeling of pride which I first sense and then reciprocate, I can’t remember who initiates it but photos are requested and taken. I hand the man seated opposite me my phone and my French speaking friend puts his arm around me with such strength it feels like he has just reunited with a long lost lifetime friend or perhaps someone who represents that friend.

That little Sunday morning moment is captured forever. It says so much, it’s a bridge over an abyss of religious ignorance and intolerance, our smiles, our body language; don’t show the anger at the irresponsible media reports spreading religious hatred like napalm. We sum each other up as individuals and we like what we see, no guide book can over hype this, no tabloid can denounce it. It’s just a cup of chai, it’s a tiny gesture and it’s so significant. That photo for me says so much, not least because the moment would never have occurred if I hadn’t had had my memory card stolen yesterday. Everything happens for a reason.
When I go to leave he stands, gives me a firm hand shake and then puts his hand on his heart. It’s emotional.

I go back to my bike to find whilst he had distracted me his friends had pinched my camera, only joking. I left that town with my back straight, and my shoulders broad, my arms strong and my head held a little higher. A meeting like that can have a profound effect upon the day, what a privilege, what an honour what a wholly positive experience. 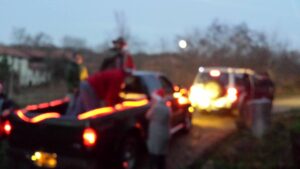