The expats don the red hats and deliver presents to the village kids.

Apparently, there is a tradition among the immigrant population this evening which involves driving around the village distributing gifts to the local children. There is even a spreadsheet of what kids live where, gender and age, not necessarily the kind of information you’d like to be found on your PC, but handy for purchasing appropriate presents. I wasn’t part of the gift-buying, but I can certainly play my part in the distribution. So I put fairy lights on the truck and create a Christmas playlist. Come the dusk, a convoy of two takes to the back roads of the village. Scottish Denis – whom I’ve not seen since summer – and zee Germans are the red-hatted immigrant helpers in my V8 sledge … along with a few sacks too. It’s actually ideal being the driver. I feel a bit embarrassed to be a gift giver, so I let the others knock on doors. Even from the driver’s seat I can feel the excitement, I think the kids were expecting this. With Slade playing, lights flashing and engine purring, our migrant nativity is welcomed with strong handshakes and rakia invites from the parents. The wide-eyed anticipation from the kids turns to pure excitement as goody bags are handed out. For me, this comes with heart-warming nostalgia, seeing the smiling faces not lit by the obligatory phones. At a voyeur’s distance, I decide how much more I want to be involved in this event next year. Along with an orange dusky sky and a full moon rising, there really is a fairy-tale atmosphere. Too bad they all missed my mileometer changing – still, that might have pushed them over the limit. I can’t help but wonder what they make of us, the affluent immigrants distributing their wealth – here, Tiny Tim, have this plastic thing. I think it’s only in my head, although we aren’t exactly blending in. What is this parade saying? Thanks for accepting us into your community, this is to ease our guilt and sense of unfairness. The native faces don’t seem to be questioning, so I try not to either.

However, the convoy then crosses to the other side of the metaphorical tracks, the gypsy part of the village. And now I have a whole new discretion to deal with. First is Ivan’s house. He’s sawn my logs and, to my knowledge, pays his rent and supports his wife and four young daughters. The gappy smiles of the gypsy girls are the cutest of the evening, this feels good. Then we round the corner and take a muddy track I’ve not been down before. It’s dark now, and outside a house with no glass in the windows is a family squatting around a fire on the verge of hypothermia. Our group of merry pranksters are now very out of place. I don’t feel so swell now; my truck is burning more fuel than they have to keep warm, which emphasises the disparity with nose-rubbing humiliation. No bloody glass in their windows, I guess you don’t miss what you’ve never had. And maybe they have a clearer view than I do through the windscreen, because I see no resentment, no jealousy, just joy, appreciation and acceptance, it sits more comfortably with them than it does with me on my heated seat. Denis and I share the same views: it’s the same village, for fuck’s sake, a five-minute walk away from my log stack and laptop, my washing machine and double glazing, my 1000-lev pechka and fuck-off Ford. Oh dear, what have I done?

When all the gifts have been distributed, we congregate in the uptown part of the community and quench our thirst – and consciences – with wine and whiskey. A few of us say that we could at least get some thick plastic and put that over their empty window frames. But then, so could they, it’s not costly or time-consuming, it’s not difficult or awkward. It’s difficult to understand why they don’t do it, awkward to feel that we should. For the kids, is that why? To put our mark of comfort on their generations of survival? What else don’t we know other than the language? What are we not getting other than cold and hungry? What should we do other than make patronising pledges? We are lords of their manor, going among them with a token gift of the season. If we helped them out financially, they would only spend it on alcohol, the token Bulgarian at the expat party says in defensive annoyance. They will only spend it on alcohol, so I guess we’re not that different after all.

That’s the way they choose to live, some things don’t change, maybe they are happy with that choice and don’t care if others think their life could be better. Why am I this way? It’s not about making the right decisions but making the best of the choices made, and I happily live a slightly alternative lifestyle. Long hair, loud music and motorbikes took hold and remain constants. As an impressionable teen, the coolest of my idols, the biggest influence of all, was Lemmy, whose surname, contra to the obligatory popular press suffix, is not ‘from Motörhead’. But to me he’s far more than that band he lives for. He’s from a time before there was rock ‘n’ roll, he’s from integrity, he’s from belief in what you do, whether you have a popular or cult following. He’s had his mainstream moment in the spotlight but now what shines through is his wisdom, honour, and a lifetime of single-minded belief in a true direction that captured my respect, and continues to captivate me. He’s my hero, my idol, my guru, my teen poster, and my adult guidance. It’s not just the music, it’s the clear and unwavering desire to follow your heart and let those who can’t accept that fall away. He is Lemmy, he plays rock ‘n’ roll and today is his 70th birthday. I write something soppy on social media, saying I’ll see you next month.

An excerpt from Not Working 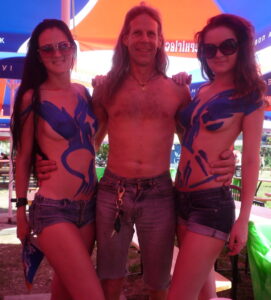